We've finally reached the point in our tutorial where we can talk about the theory of Reactivity. We've talked about defining a declarative view, but not about the aspects that make our code reactive.

Understanding the theory of reactive programming is essential to making sense of Dioxus and writing effective, performant UIs.

In this section, we'll talk about:

This section is a bit long, but worth the read. We recommend coffee, tea, and/or snacks.

Dioxus is one of a handful of Rust libraries that provide a "Reactive Programming Model". The term "Reactive programming" is a classification of programming paradigm - much like functional or imperative programming. This is a very important distinction since it affects how we think about our code.

We consider the rendered GUI to be the final result of our Dioxus apps. The datasources for our apps include local and global state.

For example, the model presented in the figure below is comprised of two data sources: time and a constant. These values are passed through our computation graph to achieve a final result: g. 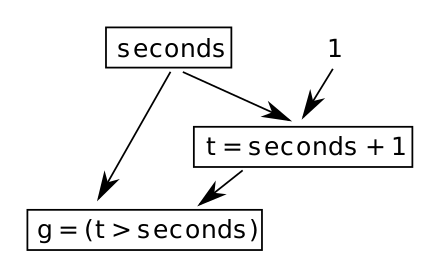 However, if we somehow changed our constant from 1 to 2, then we need to reevaluate t. If, for whatever reason, this change did not affect the result of t, then we wouldn't try to reevaluate g.

In Reactive Programming, we don't think about whether or not we should reevaluate t or g; instead, we simply provide functions of computation and let the framework figure out the rest for us.

In Rust, our reactive app would look something like:

The Dioxus VirtualDom provides us a framework for reactive programming. When we build apps with dioxus, we need to provide our own datasources. This can be either initial props or some values fetched from the network. We then pass this data through our app into components through properties.

If we represented the reactive graph presented above in Dioxus, it would look very similar:

Dioxus is "Reactive" because it provides this framework for us. All we need to do is write our own tiny units of computation and Dioxus figures out which components need to be reevaluated automatically.

These extra checks and algorithms add some overhead, which is why you see projects like Sycamore and SolidJS eliminating them altogether. Dioxus is really fast, so we're willing to exchange the added overhead for improved developer experience.

How do we update values in our dataflow graph?

Dioxus will automatically figure out how to regenerate parts of our app when datasources change. But how exactly can we update our data sources?

In Dioxus there are two datasources:

Technically, the root props of the VirtualDom are a third datasource, but since we cannot modify them, they are not worth talking about.

For local state in hooks, Dioxus gives us the use_hook method which returns an &mut T without any requirements. This means raw hook values are not tracked by Dioxus. In fact, we could write a component that modifies a hook value directly:

However, when this value is written to, the component does not know to be reevaluated. We must explicitly tell Dioxus that this component is "dirty" and needs to be re-rendered. This is done through the cx.needs_update method:

Now, whenever we click the button, the value will change and the component will be re-rendered.

Re-rendering is when Dioxus calls your function component again. Component functions will be called over and over throughout their lifetime, so they should be mostly side-effect free.

Your component functions will be called ("rendered" in our lingo) for as long as the component is present in the tree.

A single component will be called multiple times, modifying its own internal state or rendering new nodes with new values from its properties.

With the provide_context and consume_context methods on Scope, we can share values to descendants without having to pass values through component props. This has the side-effect of making our datasources less obvious from a high-level perspective, but it makes our components more modular within the same codebase.

To make app-global state easier to reason about, Dioxus makes all values provided through provide_context immutable. This means any library built on top of provide_context needs to use interior mutability to modify shared global state.

In these cases, App-Global state needs to manually track which components need to be re-generated.

To regenerate any component in your app, you can get a handle to the Dioxus' internal scheduler through schedule_update_any:

What does it mean for a component to "re-render"?

In our guides, we frequently use the phrase "re-render" to describe updates to our app. You'll often hear this paired with "preventing unnecessary re-renders." But what exactly does this mean?

When we call dioxus::desktop::launch, Dioxus will create a new Scope object and call the component we gave it. Our rsx! calls will create new nodes which we return back to the VirtualDom. Dioxus will then look through these nodes for child components, call their functions, and so on until every component has been "rendered." We consider these nodes "rendered" because they were created because of our explicit actions.

The tree of UI that dioxus creates will roughly look like the tree of components presented earlier:

But what happens when we call needs_update after modifying some important state? Well, if Dioxus called our component's function again, then we would produce new, different nodes. In fact, this is exactly what Dioxus does!

At this point, we have some old nodes and some new nodes. Again, we call this "rendering" because Dioxus had to create new nodes because of our explicit actions. Any time new nodes get created, our VirtualDom is being "rendered."

These nodes are stored in an extremely efficient memory allocator called a "bump arena." For example, a div with a handler and attribute would be stored in memory in two locations: the "old" tree and the "new" tree.

From here, Dioxus computes the difference between these trees and updates the Real DOM to make it look like the new version of what we've declared.

So, we know how to make Dioxus render, but how do we stop it? What if we know that our state didn't change and we shouldn't render and diff new nodes because they'll be exactly the same as the last time?

In these cases, you want to reach for memoization. In Dioxus, memoization involves preventing a component from rendering again if its props didn't change since the last time it attempted to render.

Visually, you can tell that a component will only re-render if the new value is sufficiently different than the old one.

This is why when you derive(Props), you must also implement the PartialEq trait. To override the memoization strategy for a component, you can simply implement your own PartialEq.

However, for components that borrow data, it doesn't make sense to implement PartialEq since the actual references in memory might be different.

You can technically override this behavior by implementing the Props trait manually, though it's unsafe and easy to mess up:

Wow, that was a lot of material!

Let's see if we can recap what was presented:

This theory is crucial to understand how to compose components and how to control renders in your app.