Dioxus is a library for building fast, scalable, and robust user interfaces with the Rust programming language. This guide will help you get started with Dioxus running on the Web, Desktop, Mobile, and more.

In general, Dioxus and React share many functional similarities. If this guide is lacking in any general concept or an error message is confusing, React's documentation might be more helpful. We are dedicated to providing a familiar toolkit for UI in Rust, so we've chosen to follow in the footsteps of popular UI frameworks (React, Redux, etc). If you know React, then you already know Dioxus. If you don't know either, this guide will still help you!

This is an introduction book! For advanced topics, check out the Reference instead.

Dioxus is a portable toolkit, meaning the Core implementation can run anywhere with no platform-dependent linking. Unlike many other Rust frontend toolkits, Dioxus is not intrinsically linked to WebSys. In fact, every element and event listener can be swapped out at compile time. By default, Dioxus ships with the html feature enabled, but this can be disabled depending on your target renderer.

The Web is the best-supported target platform for Dioxus. To run on the Web, your app must be compiled to WebAssembly and depend on the dioxus crate with the web feature enabled. Because of the limitations of Wasm not every crate will work with your web-apps, so you'll need to make sure that your crates work without native system calls (timers, IO, etc).

Because the web is a fairly mature platform, we expect there to be very little API churn for web-based features.

Jump to the getting started guide for the web. For rendering statically to an .html file or from a WebServer, then you'll want to make sure the ssr feature is enabled in the dioxus crate and use the dioxus::ssr API. We don't expect the SSR API to change drastically in the future.

Jump to the getting started guide for SSR.

The desktop is a powerful target for Dioxus, but is currently limited in capability when compared to the Web platform. Currently, desktop apps are rendered with the platform's WebView library, but your Rust code is running natively on a native thread. This means that browser APIs are not available, so rendering WebGL, Canvas, etc is not as easy as the Web. However, native system APIs are accessible, so streaming, WebSockets, filesystem, etc are all viable APIs. In the future, we plan to move to a custom webrenderer-based DOM renderer with WGPU integrations.

Desktop APIs will likely be in flux as we figure out better patterns than our ElectronJS counterpart.

Jump to the getting started guide for Desktop. 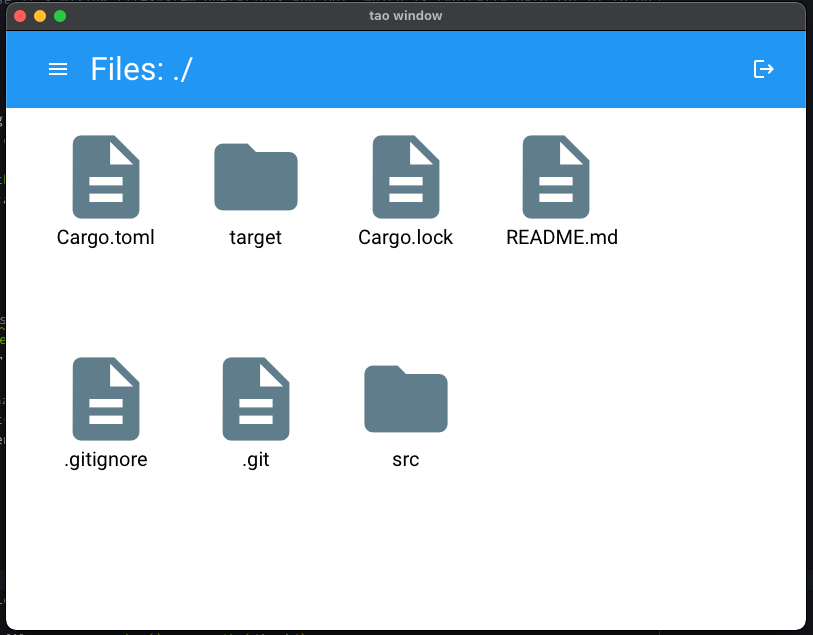 Mobile is currently the least-supported renderer target for Dioxus. Mobile apps are rendered with the platform's WebView, meaning that animations, transparency, and native widgets are not currently achievable. In addition, iOS is the only supported Mobile Platform. It is possible to get Dioxus running on Android and rendered with WebView, but the Rust windowing library that Dioxus uses - tao - does not currently supported Android.

Mobile support is currently best suited for CRUD-style apps, ideally for internal teams who need to develop quickly but don't care much about animations or native widgets.

Jump to the getting started guide for Mobile.

The internal architecture of Dioxus was designed from day one to support the LiveView use-case, where a web server hosts a running app for each connected user. As of today, there is no first-class LiveView support - you'll need to wire this up yourself.

While not currently fully implemented, the expectation is that LiveView apps can be a hybrid between Wasm and server-rendered where only portions of a page are "live" and the rest of the page is either server-rendered, statically generated, or handled by the host SPA.

The Dioxus VirtualDom, sadly, is not currently Send. Internally, we use quite a bit of interior mutability which is not thread-safe. This means you can't easily use Dioxus with most web frameworks like Tide, Rocket, Axum, etc.

To solve this, you'll want to spawn a VirtualDom on its own thread and communicate with it via channels.

When working with web frameworks that require Send, it is possible to render a VirtualDom immediately to a String - but you cannot hold the VirtualDom across an await point. For retained-state SSR (essentially LiveView), you'll need to create a pool of VirtualDoms.

Ultimately, you can always wrap the VirtualDom with a Send type and manually uphold the Send guarantees yourself.